Laugh Like A Hyena As You Win Every Game

Can You Quickly Unscramble Words? 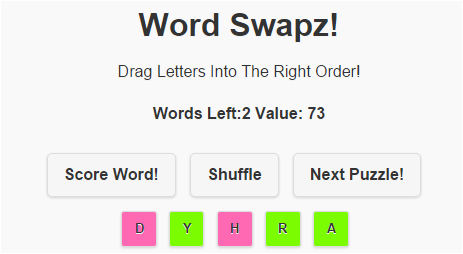 Swap Until They're ALL Green, Then Hit SCORE!

Can You Find All The Words?

How To Play Word Swapz

Welcome to Word Swapz, a fresh approach to the word scramble game. Your job is to sort your letters into as many words as possible, as fast as possible.

This word scramble game is about sorting letters into words. Don't worry, we give you the word length. If you like word jumble puzzles, you've come to the right place!

The catch? We don't want you to make just any words - nope, you need to use all the letters provided. Each set of letters was carefully selected to unscramble into as many words as possible. Some of these are gonna be tough words.... and it's all on the clock. So move fast!

But No Worries. It's easier than you think! After each swap we tell you how many letters are in the correct spot. Green means you got it!. Boom. Now you know which letters that you unscrambled correctly! When you see all Green letters, hit the Score button to record your points for that word.

But wait, there's more! Red means you gotta to swap it! Stuck? Eh, hit the Shuffle button a few times until you see some green. The word scramble game system will keep track of how many words are left.

What, you want Strategery? Remember this word scramble game is feeding you a lot of cues about how close you are. Use the shuffle button to get close and start swapping letters to unscramble the closest word. If you see a S in the letter remember to keep an eye out for plurals. Consonants are another cue as you unscramble letters. The word puzzles tend to favor fast testing. The more anagram ideas you have, the faster you unscramble word ideas for points. The more unscrambled words you have, the more you score!

Who We Are (The Word Scramble Game Experts)

In all seriousness, we are a big fan of word games and like making our own. We have a couple of versions of a unscramble words game. Thousands of people play our free online word scramble games each year.

So while we spent a lot of time optimizing our word scramble game, we also have started working on a collection of writing tools and essay helpers. This is part of our ongoing mission to make writing, spelling, and learning a language easier.

We like privacy too. So no need for an account to play or get point scores. You can get your score and share it with your friends the old fashioned way (screenshot on Facebook). Our puzzle game has a huge word list behind it; new words for everyone. Try getting that from a vocabulary app. Just sort the scrambled letters tiles into the right order and score points. I mean, it is all in your mind (you aren't playing against a person). We took a clue.

This is a simple game; shuffle the letters in your hand. It's your choice what to play. Sort the board into a line and hit score for point karma. No tricks, no app, just a website page of fun. Players can set their course based on the length of the letters, screen size, and space. Perfect for students and learners.