It has recently come to our attention that there are a large number of people in the world who cheat at online hangman. They use technology to crack good hangman words. Who knew? I swear, we built our hangman solver strictly as an academic exercise! To quote Captain Renault in Casablanca:

We at Hanging Hyena, as loyal guardians of the public morals, have launched a historic research project. Yup, we’ve already booked our tickets to Stockholm.

Our question: Are certain words for hangman harder to guess than others?

This specific question isn’t exactly unexplored. However, most of the available studies presume an unassisted human player will be using their findings. That’s just so 1995! We’re moving this analysis into the 21st century, and providing our participants with access to the finest hangman solver on the Internet! Our new question:

What words should you play in hangman if you suspect your opponent is cheating?

In other words, we want very HARD hangman words….

To understand the impact of cheating on game outcome, we dissected how a hangman cheat program gives the cheating player an advantage. First, your effective vocabulary is massively expanded – with about 70K eligible words at your disposal, you’re the uber word-nerd! But wait, there’s more! The cheat tool eliminates most of your word recall bias – eg. since you probably don’t actually walk around thinking about midevil warfare or flesh eating warts! But the really big edge – which trumps all the others – is that a good hangman cheat program lets you use what statisticians call “conditional probability” to eliminate words faster. This lets you step around the worst of the good hangman words.

Most of us know that vowels are the most common letters of the alphabet and logically should be your first guess in game of hangman. A and E are generally good guesses. However, there’s a limit to just how much of this stuff you can keep in your noggin…

For example, the distribution of letters does vary by word length. E is best for longer words, A is best for shorter words, S is usually a very good second guess. Static decision making tactics like this lose their value several moves into the game. If several guesses have already been made, the universe of possible words may be reduced to under a hundred – with a radically different letter distribution. A cheat program gives a player the ability to refine their next guess using the remaining words after each guess. This will create a significant advantage (-2 handicap for Spock, – 8 handicap for Homer Simpson).

During the past several days, we have played about 240,000 games of hangman, using a simulator. For the computer scientists in the audience, we ran this as a map-reduce job. We took the solver program behind this site and applied it to every word in the Enable dictionary (same one used by Zynga for Hanging With Friends). The computer used the suggest letters feature of our solver to pick the most effective letter to guess for each round. We kept track of how many strikes each word racked up and tallied the answers. And we created rules to find good hangman words.

Since every player has the choice of guessing a letter or guessing a word, our simulator looked at how many potential words remained at the end of each guess. Once the list of possible words got small enough, it would switch to guessing words (vs. iterating through the remaining letters). This mimics how a human guesser usually acts (filters down to a list of possible words, picks a target word to focus their final guesses around).

We gave extra credit if the universe of possible words stayed “huge” for most of the round. For example, words where a rational guesser never got below 20 words until the last few guesses ranked higher than words where the guesser quickly reduced the list of possible words down to 3 – 4 candidates. This reduces the odds of the player successfully ignoring “rational guidance” and making a lucky guess…

So what did we learn: 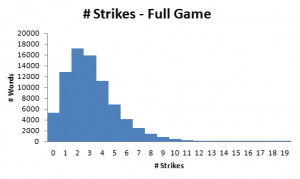 So what do you send your frenemy? What are the Unbeatable Words?

In a word…4 or 5 letter words. No. Not THAT four letter word. Although it is also hard to guess. The safest words inflict strikes before they get most of the word on the board.

JAZZ is an interesting case. While it is technically hard to guess, we’re not sure if you can actually get the double Z in Hanging With Friends (rare tile). It is also fairly famous as a hard hangman word, so an experienced player will likely be on the lookout for JAZZ.

Many four letter words are unbeatable words because they overwhelm your opponent with possible options. Several five letter words also had good results. Here are some examples:

We approached this project as an analysis of traditional Hangman. However, for those of you interested in Hanging with Friends, you should be aware that Zynga tweaked their version which reduce the number of guesses. The most significant tweak is their policy of giving you a free letter – usually the last vowel of a word. This reduces the average # of guesses required (for a hanging with friends cheat) by 20% (about 1/2 guess per word).

So there you have it. Some of these words are not like the others. So get off your duff (another excellent choice) and go prank a cheetah with one of the impossible words!

2 Replies to “Good Hangman Words For Hanging With Friends”