“Drat…..I just can’t make anything good with these tiles….”

If you haven’t muttered this under your breath a few times, you likely haven’t played Scrabble very much.But are you muttering this because of a mental block or truly bad tiles? Within the vast universe of possible Scrabble racks, what does “good” look like?

The serious Scrabble player would state that the effective value of a hand depends on where you are in the game. The early game favors scrabble racks that “play well with others”, giving you relatively large words with common letters that can easily be patched onto an open board. The end game favors prefixes, suffixes, and small words you can sneak into an open space. Bonus squares and the opportunity to build on large (5 – 7 letter) existing words also boost your score. All of this is true.

But here is a simpler way to approach the question: what if we look at the highest scoring word you can create using just the letters in your rack?

Mathematically, this question became: for a standard Scrabble rack, how many points of words (aka. the expected value) should the average Scrabble rack contain?

Fortunately, this question is easily answered with a little computer modeling (described at the end of this article). We simulated drawing tiles from the standard scrabble distribution and fed them into a word solver program. This program identifies the word with the highest score which could be constructed from each set of tiles. When we tallied up the results after 10,000 iterations, here is how the points were distributed: 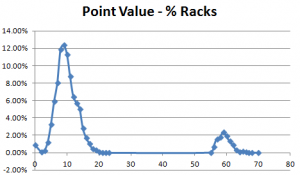 Key points from this analysis:

So the next time you’re stuck looking at a rack of letters you can’t seem to reassemble into a reasonable word, take hope! Statistically, there’s at least one word hiding in there and in many case…a rather nice one!

Or as us math nerds like to say: A Solution Exists

Details of the Analysis:

This analysis treats scrabble in a manner similar to a game of seven card “stud” poker; select seven tiles (cards) and see what you can make with them. Instead of poker’s set of possible hands, we’re looking for English words. To implement this idea, we used Python to build a simulation model: we randomly selected seven tiles from the scrabble letter distribution. These seven tiles were fed them into a dictionary search program that identifies the words that can be built from those tiles. We scored the words and selected the highest word. If the word used all seven tiles, we gave credit for a scrabble bingo (+50 points). Since computer time is cheap, we repeated the process 10,000 times.